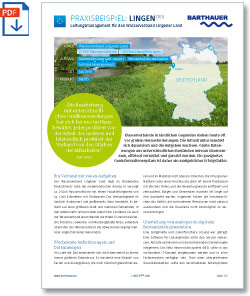 A board with many responsibilities
Wasserverband Lingener Land is located in north-west Germany close to the border with the Netherlands. It supplies approximately 21,000 household connections with drinking water through a water mains network of around 1,300 kilometres. The board's administrative region is mainly rural with a low population density. It consists of one larger town and several municipalities. Both the district and the water board have undergone changes over the last ten years. Numerous industrial, commercial and development areas were added and the water board also assumed responsibility for wastewater disposal on behalf of several associated municipalities.

Growing requirements and data volumes
Over time, the amount of data evolved into increasing data chaos. There were numerous maps and analogue plans which were drawn by hand, with inconsistent scales. Finding a network component or a connection frequently resembled a puzzle with many different pieces. Administration became inefficient and time-consuming. Citizens and municipalities often had to wait a long time for information. Overall, those in charge had the feeling that the existing resources were not being used to full advantage and that supply and disposal services to households were sub-optimal.

Conversion from analogue to digital system documentation
A contemporary and future-proof solution was needed. The objective of implementing a software for distribution networks was to improve service, optimise processes and integrate the existing data. Integrated into the existing IT concept, the network information system (NIS) was to be available to all departments. In spite of a comprehensive overall concept, the ability to perform specialised tasks at various workstations was to be retained. The system was to be as open and flexible as possible, adapting to the individual needs of the water board without incurring additional costs. In addition, the water board expected technical depth and innovativeness.

The implementation: Easier than expected
One system stood out from the rest when it came to meeting this extensive catalogue of requirements: BaSYS from BARTHAUER. Workstations for drinking water and wastewater as well as several inquiry workstations were installed in 2001 after extensive testing. Internal employees looked after recording all initial data for wastewater while an external engineering office digitally recorded the water supply network. Naturally, some of the employees had serious reservations about using a supposedly complicated GIS since analogue system documentation was familiar to them. Training tailored to individual requirements combined with webinars and telephone customer support eased the transition period and the results convinced all sceptics!

The result: Efficient and contemporary line management
Today all drinking water and sewer networks are uniformly and jointly modelled and administered under BaSYS. Data chaos has yielded to efficient, transparent data management that benefits employees and clients equally. Within the water board, all employees have access to browser-based inquiry applications in order to access the required data quickly and easily without the risk of accidental deletion. On the other hand, the planning workstations for drinking water and wastewater have significantly more rights and can select from several graphical applications based on a single database for processing. The multi-platform concept allows employees in each department to select the tools of their choice. For example, CAD systems are preferred for design and data capture while content plans are most readily prepared with ArcGIS. Workflows have been significantly accelerated thanks to BaSYS, which also benefits the water board's clients. Planning information for drinking water and wastewater lines is now examined during a telephone inquiry and issued by e-mail within one day.

Almost 10 years after the implementation of BaSYS, Peter Gödde and the entire team are still excited about “their” NIS. “Our work is more economical and efficient. We only require a fraction of the time for many tasks compared to before. Problems with redundant data are a thing of the past and processes are more harmonious with a greater overall level of automation. We now have a powerful tool for planning and optimisation tasks. BaSYS makes it easy for us to work according to our self-image: The sustainable use of valuable resources and a fair price for our clients.”